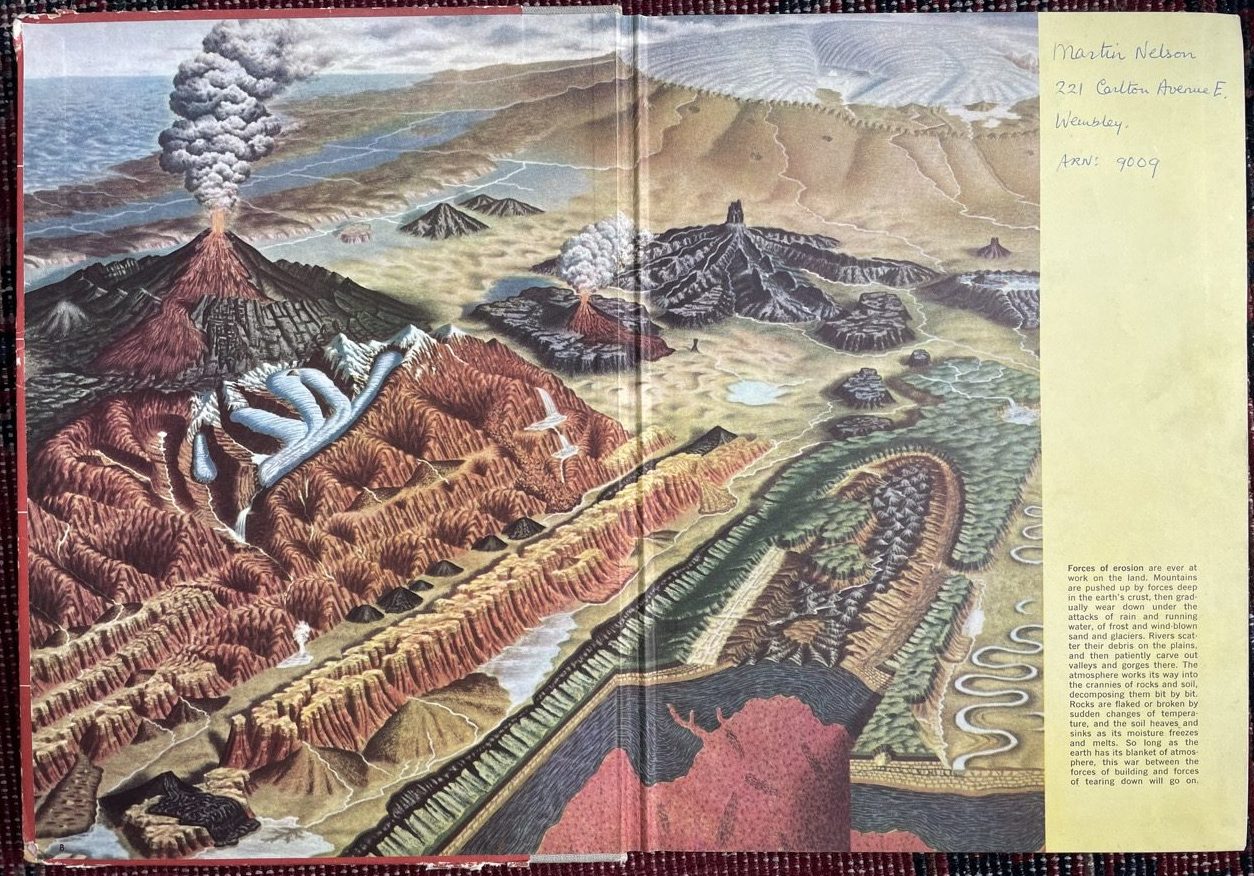 ‘The carbon dioxide in the atmosphere has increased by 10% in the last 50 years…Man himself then, may be the cause of our warming climate.’ Nothing unremarkable at first glance, but reading this a few weeks ago stopped me in my tracks. Why?

It’s the concluding sentence of “The Canopy of Air”, from The World We Live In (Special Edition for Young Readers), a book recently repossessed from my childhood, and probably key to igniting my passion for geography, my degree subject and my career before singing grabbed me.

Nineteen fifty three: this is way before the environmental movement, before so much of current scientific knowledge. In “Chapter I: The Earth Is Born”, for instance, plate tectonics is absent from the explanation of continent-building, and the book concludes: ‘the universe is about 5 billion years old’. Current estimate: 13.77 billion.

The magazine was LIFE, the mainstream weekly then in its heyday, and its author, Lincoln Barnet, was doing an Attenborough populist job, serialising Earth’s story for a worldwide audience before the Age of TV. It was the Life on Earth blockbuster of its day.

So what happened to the casually stated ‘Man may be the cause of our warming climate’ in the intervening 68 years? 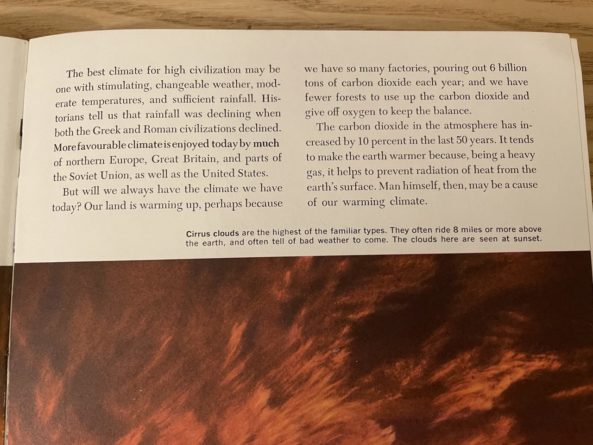 First, of course, the acquisition of irrefutable scientific proof; but it has also taken two thirds of a century to face down the denial of man-made climate change, whether by deliberate effort, delusional thinking or unconscious bias. Gaslighting (double meaning there…), denial, even outright lies have been shielding us from reality. That Age of TV has morphed this century into an Age of Delusion, it seems. We have not faced up to the Inconvenient Truth. In rich nations net zero carbon¹ is going to require self-denial², not truth-denial. Greta Thunberg and others have been telling us so, and we know they are right.

Sixty-eight years on, we all have to face up to a crisis with innovation and change. eQ is an incremental but accelerating personal approach based on universality. I believe it is more radical than first appears; the (very) broad brush to back up the rapier. Two eQ blogs develop the theme:

If only we had acted on deductive, common-sense, logic back in the ’50s, just before exponential CO2 growth kicked in! But my instinct is to be optimistic, and ‘we can all do our bit’ drives eQ. Let’s send some (un-greenwashed, realistic) positivity vibes to all at COP 26.

And on the eve of putting the clocks back an hour, here is a small contribution, eQ-logic derived: a 100% cost- and pain-free carbon-saver. Let Mr Spock explain.

¹ Dieter Helm author of Net Zero: ‘…key is to measure carbon consumption, not carbon territorial production. This will show how far we are living beyond our climate means in the UK  – or anywhere where unilateral targets are adopted.’

² But consumerist self-denial does not have to be a negative. Reframe economics with wellbeing replacing growth, and what, with beautiful simplicity, do you get? A Doughnut!

³You can check global CO2 in 1953 and today in the ‘live’ source version of  the Exponentials blog image.