Spurred on now by a cycle fundraising challenge in tandem with lockdown suburban excursions, and having investigated my parental roots in Lewisham I set off next in the opposite direction, into Brent and Harrow – the heart of John Betjeman’s Metroland. This is where I spent my formative years, aged 7 to 17.

I gave myself an ostensible reason; to buy ingredients for a Sri Lankan curry in South Harrow, where there is a choice of specialist shops. This is just further down the Hill from my old school, John Lyon, though none of them were there in my day. But to rewind, or backpedal:

I chose to make a Metropolitan Line-hugging route the return leg, and set off on a more southerly option via Queens Park, then picking up LCN 45 through Harlesden and Wembley Central; you might call this BakerlooLand.

First destination was my home from the age of seven in Preston Park. Among those suburban streets were factories; we looked out at the Osram lightbulb works, and up the road was a British Oxygen factory that used to blow up now and again when a cylinder was dropped inadvertently, shattering the neighbourhood windows. The blast wall on the street elevation was not up to the task, and wisely it was relocated. 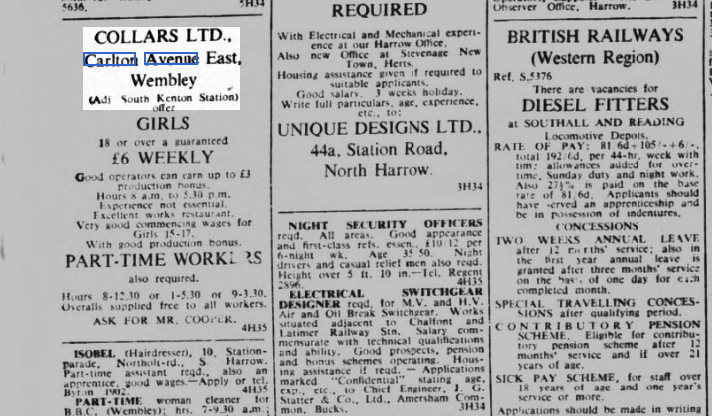 Next up, Collars Ltd., the factory that laundered and starched detached collars (a Harrow Observer ad of 1958 asks Girls to apply for work – £6 per week) – a doomed enterprise even by the mid 50’s, and surely it did not survive the swinging sixties that followed. And at the corner the little Nissan hut church where I first sang.

Next I followed my walking and cycling route to school (on wet days it would be tube from Preston Road to Harrow-on-the-Hill then walk), first crossing under the railway at South Kenton. Under now, but then it was over Smokey Bridge – a magnificent viewpoint to watch (and train-spot) the Up Expresses steam-hauled by Stanier 4-6-2’s as they opened up their regulators to full speed ahead out of Euston. After that, a right turn into the scrubland of Northwick Park – except that it is now mostly occupied by the eponymous hospital, so I have to detour by roads to climb up the Hill to Harrow School Speech Room – where I sang some more, both there and in the church of St Mary above (see featured image of church spire, Speech Room entrance and the cover of a recording of Bach’s St John Passion of 1964, in which I played flute, my singing voice being in transition from treble to bass). 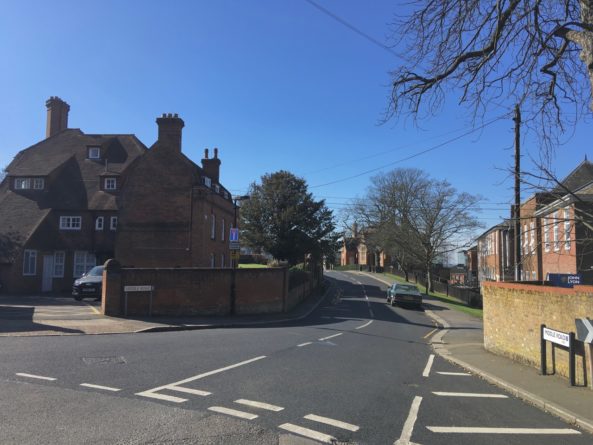 John Lyon shares a foundation with Harrow, and we were fortunate to have use of facilities such as the Speech Room – especially those baby-boomers of the time like me that enjoyed government free places. The school is respectfully half-way down the hill. There on the left is the Red House where my first two years were spent, and behind it in its garden the Music Room, opened in my sixth form years in a musical heyday from which again I profited. I was the first pupil to win a choral award to an Oxbridge college.

So on then to pick up Ceylon red rice, rampa, curry leaves, brinjal etc; into the knapsack, and home in a flattened figure of eight route, first south then north of the outbound route. Starting through gated private roads to our sports fields in Sudbury Hill (an undistinguished history here I fear), after which I opt for a long stretch of main road to Wembley Park and Neasden, where I might have picked up a slight hand injury, jarred by potholes (LB Brent does not have a good record for cycling provision or road maintenance). Fortunately Quietway 3 guides me home from there via Gladstone Park, then close to the Metropolitan tracks that used to take me on rides into town (early memories are in brown slam-door rolling stock, with the fast trains to Amersham hauled by separate electric locos).

There’s a lot of social history to unpack both here and in the previous post. All the research rides to devise Cycle Orbital has meant I have overflown the suburbs for some time; my journeys from the doorstep N, NE and SW have been equally interesting and revealing…